Subject: Putin Quote  (Similar to the sentiments of Donald Trump!)  POLITICIANS YOU MUST HEED THIS ADVICE!

This is one time the elected leaders in the civilized world should pay attention to the advice of Vladimir Putin.
No wonder he was selected by Forbes as the most powerful person in the world.

On August 04, 2013, Vladimir Putin, the Russian president, addressed the Duma, (Russian Parliament), and gave a speech about the tensions with minorities in Russia :

“In Russia , live like Russians. Any minority, from anywhere, if it wants to live in Russia , to work and eat in Russia , it should speak Russian, and should respect the Russian laws. If they prefer Sharia Law, and live the life of Muslims then we advise them to go to those places where that’s the state law.

” Russia does not need Muslim minorities. Minorities need Russia , and we will not grant them special privileges, or try to change our laws to fit their desires, no matter how loud they yell ‘discrimination’. We will not tolerate disrespect of our Russian culture. We better learn from the suicides of America , England , Holland and France , if we are to survive as a nation. The Muslims are taking over those countries and they will not take over Russia . The Russian customs and traditions are not compatible with the lack of culture or the primitive ways of Sharia Law and Muslims.
“When this honorable legislative body thinks of creating new laws, it should have in mind the Russian national interest first, observing that the Muslims Minorities Are Not Russians.”

The politicians in the Duma gave Putin a five minute standing ovation.

MOST MEXICAN-AMERICANS AGREE WITH TRUMP.
The majority of legal immigrants, and children of legal immigrants agree with Donald Trump.  They came here using the system, as cumbersome as it is.  They feel:
1) The simple fact the people Trump referred to came here illegally makes them criminals.
2) A large number of them do commit criminal acts.  SEE THE STORY FOLLOWING THE IMMEDIATE ONE BELOW.
3) The legal immigrant fears the gang-bangers such as MS-13 and other terrorists and criminals sneaking in with the otherwise innocents.
4) The Hispanic leaders quoted in the article below are in favor of criminal behavior and do not reflect the attitude of legal citizens!
4) Dumb republican politicians better wise up!

Several 2016 contenders have brushed off Trump’s comments while others have ignored them. Marco Rubio, a Florida senator who is Hispanic, denounced them as “not just offensive and inaccurate, but also divisive,” after declining for two weeks to address the matter directly. Another Hispanic in the race, Ted Cruz, said Trump is “terrific,” ”brash” and “speaks the truth.

It’s an uncomfortable moment for Republicans, who want more votes from the surging Latino population.

And it could be a costly moment if more candidates don’t go beyond their Donald-will-be-Donald response and condemn him directly, said Alfonso Aguilar, a Republican who leads the American Principles Project’s Latino Partnership.

“The time has come for the candidates to distance themselves from Trump and call his comments what they are: ludicrous, baseless and insulting,” Aguilar said. “Sadly, it hurts the party with Hispanic voters. It’s a level of idiocy I haven’t seen in a long time.”

So far, Trump has paid less of a political price than a commercial one.

The leading Hispanic television network, Univision, has backed out of televising the Miss USA pageant, a joint venture between Trump and NBC, which also cut ties with Trump. On Wednesday, the Macy’s department store chain, which carried a Donald Trump menswear line, said it was ending its relationship with him. Other retailers are facing pressure to follow suit.

On Friday, the NASCAR motorsports series said it will not hold its season-ending awards ceremony at the Trump National Doral Miami. The CEO of a top NASCAR sponsor, Camping World’s Marcus Lemonis, had said he would not participate in the awards ceremony if it were held at a property owned by Trump, whom he criticized for “recent and ongoing blatantly bigoted and racist comments … in regards to immigrants.”

In his speech last month marking his entry into the Republican race, Trump said Mexican immigrants are “bringing drugs. They’re bringing crime. They’re rapists. And some, I assume, are good people.”

The businessman has refused to back down, although he insists his remarks were misconstrued.

“My statements have been contorted to seem racist and discriminatory,” he wrote in a message to supporters on Thursday. “What I want is for legal immigrants to not be unfairly punished because others are coming into America illegally, flooding the labor market and not paying taxes.” His original comments, though, did not make a distinction between Mexicans who came to U.S. legally and those here illegally.

His rhetoric may resonate with some of the Republican Party’s most passionate voters, who have long viewed illegal immigration as one of the nation’s most pressing problems. But the 2016 contest brings opportunity for the party to make inroads with Hispanics, with several Latino candidates and a former Florida governor, Jeb Bush, who has deep Latino ties and speaks Spanish and hasn’t been shy about using it in the campaign.

Even so, Bush has said little more about Trump’s comments than that they were “wrong.”

“Maybe we’ll have a chance to have an honest discussion about it onstage,” Bush said last weekend while campaigning in Nevada, referring to Republican presidential debates.

Rev. Gabriel Salguero, president of the National Latino Evangelical Coalition, is paying keen attention to how the candidates respond to Trump’s “xenophobic rhetoric.”

“We’re listening very, very closely, not just what candidates say but what they don’t say — the sins of commission and the sins of omission,” he said.

—Cruz said he likes Trump and thinks NBC “is engaging in political correctness” in breaking ties with him.

—Rubio said the next president “needs to be someone who brings Americans together — not someone who continues to divide.”

Not since the 2004 re-election campaign of President George W. Bush has a Republican presidential candidate earned as much as 40 percent of the Hispanic vote. Mitt Romney got a dismal 27 percent in the 2012 contest against President Barack Obama. 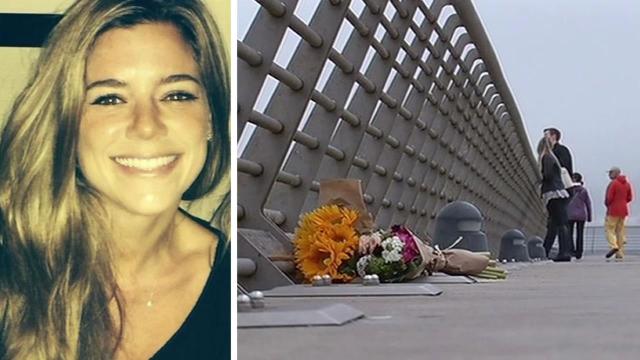 SAN FRANCISCO (AP) — A man suspected in the shooting death of a woman at a busy San Francisco tourist destination has seven felony convictions and has been deported five times, most recently in 2009, a federal agency said Friday.

Police officers arrested Sanchez about an hour after Wednesday’s seemingly random slaying of Kathryn Steinle at Pier 14 — one of the busiest attractions in the city. People gather there to take in the views, joggers exercise, and families push strollers at all hours.

Kice said ICE issued a detainer for Sanchez in March, requesting notification of his release and that he stay in custody until immigration authorities could pick him up. The detainer was not honored, she said.

Freya Horne, counsel for the sheriff’s office, said Friday that federal detention orders are not a legal basis to hold someone, so Sanchez was released April 15. San Francisco is a sanctuary city, and local money cannot be spent to cooperate with federal immigration law.

The city does not turn over people who are in the country illegally unless there’s an active warrant for their arrest, she said. Horne said they checked and found none. ICE could have issued an active warrant if they wanted the city to keep him, she said.

“It’s not legal to hold someone on a request to detain. This is not just us. This is a widely adopted position,” Horne said.

Steinle was gunned down while out for an evening stroll with her father along the waterfront. Police said witnesses heard no argument or dispute before the shooting, suggesting it was a random attack.

Liz Sullivan told the San Francisco Chronicle (http://bit.ly/1IuWbKw) the killing of her daughter was unbelievable and surreal. “I don’t think I’ve totally grasped it,” Sullivan said.

Police Sgt. Michael Andraychak said witnesses snapped photos of Sanchez immediately after the shooting, and the images helped police make the arrest while he was walking on a sidewalk a few blocks away.

Police were still waiting for fingerprint identification on Sanchez, who is believed to be a 45-year-old whose last address was in Texas. Authorities said he does not yet have a lawyer who could be reached for comment.

Sullivan told the Chronicle that her 32-year-old daughter turned to her father after she was shot and said she didn’t feel well before collapsing.

Her father immediately began CPR before paramedics rushed the woman to the hospital. “She fought for her life,” Sullivan said.

Steinle went to high school and previously lived about 40 miles east of San Francisco, the newspaper said. She recently moved just blocks from the waterfront and worked for a medical technology company.

This story has been corrected to show the shooting happened Wednesday instead of Thursday.

NEED PROTECTION?  LIFE INSURANCE ISN’T ENOUGH.  BUY A GUN, AND LEARN HOW TO USE IT!

BUY SOME GOLD AND PROTECT YOUR WEALTH!  See how to get FREE gold!